Two common concerns in incident response are (a) not having the data needed to investigate an incident and (b) not being able to find signs of incidents in a mass of other data. My Networkshop talk (see “Making IT Safer… Safely”) looked at how the GDPR principles might help us to get it, like Goldilocks’ porridge, “just right”. 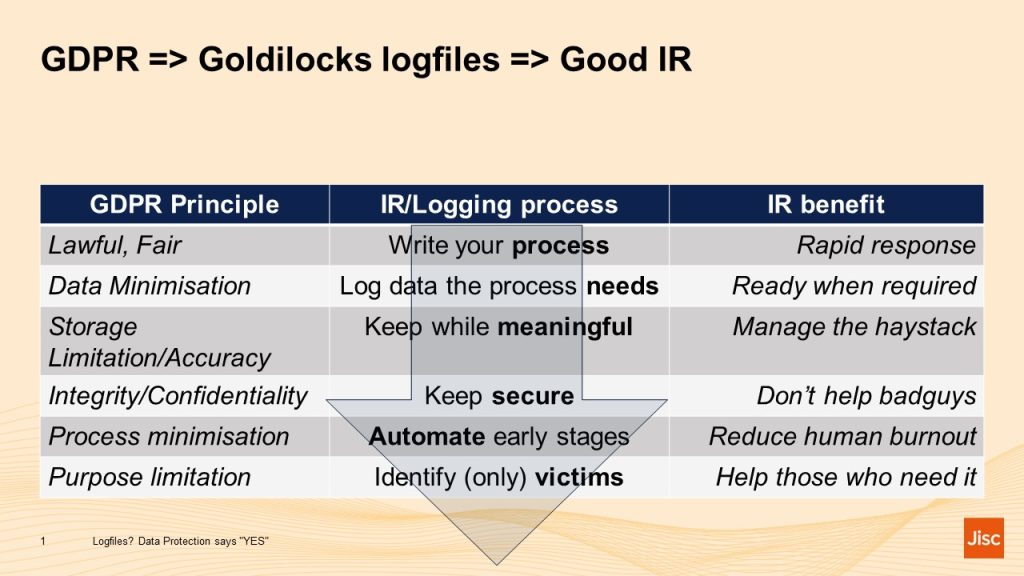 Once you’ve developed your process, it may be worth checking it by conducting a more or less formal Data Protection Impact Assessment. We are doing these regularly for the Janet Security Operations Centre, who are finding them a really useful way to think about their work (so much so that they asked to do them more often!). We also publish the results, which we hope will reassure users of the network that, yes, we do process a lot of personal data, but that’s necessary to protect you and we work hard to ensure we do it as safely as we can.

I'm Chief Regulatory Advisor at Jisc, responsible for keeping an eye out for places where our ideas, services and products might raise regulatory issues. My aim is to fix either the product or service, or the regulation, before there's a painful bump!

We use cookies on our website to give you the most relevant experience by remembering your preferences and repeat visits. By clicking “Accept All”, you consent to the use of ALL the cookies. However, you may visit "Cookie Settings" to provide a controlled consent.
Cookie SettingsAccept All
Manage consent

This website uses cookies to improve your experience while you navigate through the website. Out of these, the cookies that are categorized as necessary are stored on your browser as they are essential for the working of basic functionalities of the website. We also use third-party cookies that help us analyze and understand how you use this website. These cookies will be stored in your browser only with your consent. You also have the option to opt-out of these cookies. But opting out of some of these cookies may affect your browsing experience.
Necessary Always Enabled
Necessary cookies are absolutely essential for the website to function properly. This category only includes cookies that ensures basic functionalities and security features of the website. These cookies do not store any personal information.
Non-necessary
Any cookies that may not be particularly necessary for the website to function and is used specifically to collect user personal data via analytics, ads, other embedded contents are termed as non-necessary cookies. It is mandatory to procure user consent prior to running these cookies on your website.
SAVE & ACCEPT